Kilrush Girls Dig In at Missionvale 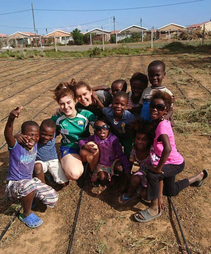 THREE Kilrush girls, who are studying in Limerick, have recently returned from a 10-day working trip to the Missionvale township, on the outskirts of Port Elizabeth in South Africa. They worked under the guidance of Lissycasey’s Sr Ethel Normoyle, who has lived in Missionvale since 1988.

Clodagh Larkin, Kayla Crowley and Aoife Carrig fundraised before travelling to Missionvale, where an estimated 25,000 live. The HIV virus affects 70% of its population, including children, while almost 75% of the adult population of Missionvale is unemployed. The Missionvale Ireland Trust was established in late 2008, as the Irish support arm to the Missionvale Trust.

The Kilrush girls primarily worked to restore a vegetable garden in the township, which has fallen into disrepair. They had to weed and fracture the ground, which was rock hard. There was a poignant reason why the garden had been left untended.

Kayla and Clodagh are social work students at LIT, while Aoife is a nurse studying mental health at UL.

Two other girls travelled to Missionvale last year, which alerted Clodagh, Kayla and Aoife to the opportunity.

“Aoife’s mam, Teresa, is involved with the youth ministry. She told us about it. Two girls from Kilrush, Ruth O’Dea and Shannon Carroll, went last year. They were talking about how good it was and Teresa got us into it,” Clodagh said.

They started fundraising in December and were humbled at the level of support from the people of Kilrush.

“Once everyone in the community found out what we were doing, they were very generous,” Kayla acknowledged.

The three girls spent 10 days in Missonvale and travelled 15 minutes each morning to reach their workplace in the garden.

“We spent a lot of time in the vegetable garden and then we played with the kids. There’s such a drought out there that trying to dig the ground was nearly impossible,” Clodagh recalled.

They lived on tea and scones while in the township and on hake and dried rice in their living quarters.

“There was no bacon and cabbage,” Kayla revealed.

“It was very different food. I’d look at certain stuff differently now food-wise. The amount of food that’s thrown out is unbelievable and it’s a country of contrast. You could be in one street and it could be amazing. Then you turn right and you’re in a township,” Clodagh found.

Along with working in the garden, they also visited the primary school in Missionvale.

“We went into the school on their lunch breaks and we met with Candice, who is the youth worker there. She came with us to play games with the children. It was a big eye-opener to see how other people live and to see how happy they can be. Back here, everything is taken for granted. They don’t give out or anything over there,” Clodagh added.

Kayla could not believe how little food families live on.

“For a couple of days, we were in the nutrition centre. It’s a massive shed. People line up from 8am. Everyone gets half a loaf of bread for the week. A family with sick people in it would get half a loaf of bread, a tin of beans, a tin of sardines, sugar and flower for a week. That could feed a family of 10. They were so clean. There are only six or seven taps around the township. They go with their bucket, get water and bring it home. They also wash their clothes from a bucket. They mind what they have and they really appreciate it.”

The met Sr Ethel every day and she collected them from the airport when they arrived.

“Sr Ethel was always there. She went out on her own years ago, trying to help people. It’s horrible there but it’s amazing at the same time. It’s horrible to be looking at all of these people who are so sick but you have to accept it’s like that and you can’t change everything. You can’t expect things to change just because you went out there. You can do your best to help,” Kayla reflected.

“She’s amazing,” Clodagh said of Sr Ethel, adding that she intends to travel to Missionvale again.

“It would be lovely to use our degree out there,” Kayla noted, as they examined photos from their stint in Missionvale.