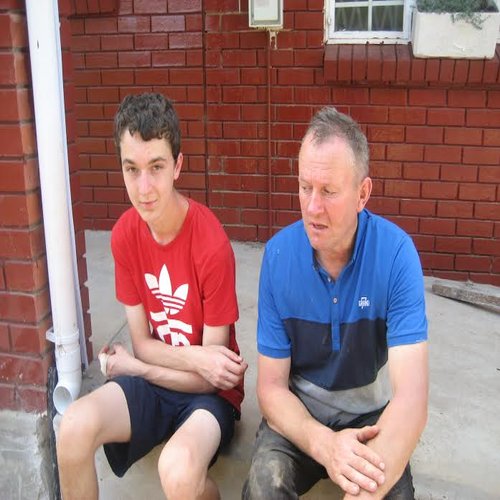 My experience in Missionvale was unforgettable and I have memories from there that I will have forever. I decided to go when I heard about other peoples experiences and decided that I would go the following year.

When we arrived in Port Elizabeth airport I was immediately struck by how developed the city was with restaurants, hotels and supermarkets but once we arrived in the township I saw that it was really a country of contrasts. The first thing that strikes you is the rubbish everywhere and how unsanitary the place is. The houses are tiny and house whole families. They have no running water and their toilet is a bucket in a shed made of whatever could be found by the people, like plastic or galvenized sheeting. The people have to walk to pumps every day to get  water, which is a resource that we completely take for granted.

The following day we went to the care centre itself and were greeted by the care workers and locals who were all singing and dancing. They waved Irish flags and really showed us how much they appreciated us being there. First of all I worked in the school which I was greatly impressed by. Ethel says that education is the key to the development of the area and I immediately saw that in the school. They are taught a wide range of subjects as well as English. I read them fairytales like “The Three Little Pigs” and asked them questions afterwards. All of them had a good standard of English and you could see that they were interested in learning, which is another aspect of our lives that we take for granted. I also taught them the tin whistle with another volunteer. Music seems to be a great strong point for the children there. They picked it up really quickly and could flawlessly play “London Bridge” within an hour.

I also worked in the clothing warehouse where clothes are sorted, washed and folded in age categories to be distributed to the people. It was amazing to see the difference a new pair of shoes could make to a persons life, when we left clothes on the last day. The Father Christmas room was another room in the centre where eight thousand presents were wrapped annually to be distributed to the children in the township. The presents may have only been small like a wooly jumper and a doll but it was obvious that these presents would make a huge difference to the children there.

The nutrition centre was another interesting day. Here food packages containing: flour, sugar, beans, a bag of powdered soup, soap and a tea bag were distributed to the people once a week. Without these vital packages the people would be devastated. When the soup ran out you could see them crying and it would make you feel just awful. This day and the day out in the township were the most interesting. In the township we were doing home visits with the nurses taking blood pressures and doing physiotherapy. I don’t think that Missionvale is really experienced until this is witnessed. Some people had amputations due to diabetes and were still able to keep a smile on their faces. It is clear that they see the good in their life and don’t focus on the bad otherwise they will only become upset and angry.

Overall my time in Missionvale is one that will stand to me forever. It was the experience of a lifetime. Sister Ethel is the most inspirational person I have ever met and feel privileged to have worked in Missionvale which she has made what it is today. She is the heart and soul of the community. I know that I will be back again.